← more from
Neuma Records
Get fresh music recommendations delivered to your inbox every Friday.
We've updated our Terms of Use. You can review the changes here. 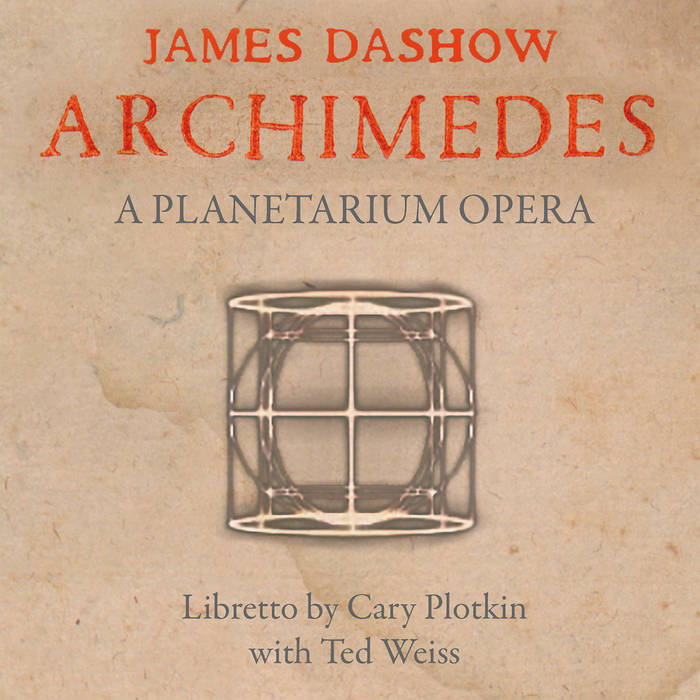 From Mantua and Bayreuth to warehouses and wilderness, opera composers have often created dramas for particular kinds of spaces. Now add planetariums to the list. That hemispherical stage of scientific wonderment is the perfect venue for James Dashow’s monumental opera, Archimedes.

After witnessing some epic laser and electronic music shows that took place in science museum theaters, Dashow – a distinguished electronic music pioneer – decided this venue would be perfect for bringing the Ancient Greek mathematician’s story to life. It was only later that he learned Archimedes had in fact invented the first planetarium (a mechanism that demonstrated the planets rotating around the Earth). The omen was good, and he dedicated the next nine years to the immersive multimedia project for live voices, pre-recorded instruments, and electronic sounds, heard on this release for the first time.

“The opera utilizes always the full surround effect, even when visually the live singers are in the usual positions of traditional theatre, in front of or in the middle of the audience, fixed on a stage. The music keeps the sense of the audience being in the midst of the action, not as outside observers. The synchronization of musical phrases, rhythms, harmonies, textures with their movements around the planetarium (the spatialization) adds a whole new expressive dimension to the musical experience. There is something about experiencing musical events in space, not just in a line across a stage, that is quite moving for the human sensibility.”

For the recording, Brian Zeger of Juilliard brought together some of the finest freelance opera singers in New York, including Michael Kelly as Archimedes, Martin Bakari as Marcellus, and Adrian Rosas as Hieron. Jennifer Zetlan’s super high (beyond the Queen of the Night) pitches in the surrealistic Demiurge were other-worldly, Brian Giebler’s high and medium tenor blending splendidly with her. Recorder virtuoso Antonio Politano contributed many extraordinary multiphonic sounds to the score and eleven year old Madeleine Albus convincingly played the role of Child. The narrative is set in motion by noted Shakesperian actor, Philip Kerr, beginning the poetic, witty and dramatic libretto by Cary Plotkin with Ted Weiss.

Any opera worth its salt has hidden structural elements that underpin the drama. Here, Archimedes is generally characterized by guitar sounds of different kinds. His growth and maturation are matched by the gradual timbral change of the different guitars over time. Marcellus is characterized by a chamber group that grows over the course of the piece, from just four instruments at the start to a small chamber orchestra, mainly featuring harp, viola, alto flute and flugelhorn. When Marcellus and Archimedes meet in Act III the music is an interplay between these two ensembles.

It seems that Archimedes himself felt his most important mathematical discovery was the ratio of the volume of a cylinder to the volume of its inscribed sphere — 3/2. The album cover shows these two objects, and apparently Archimedes had that figure inscribed on his tombstone. “This ratio is also that of the perfect fifth in musical terms. Hence, all of his music consists of different selections of the 8 pitches that make up the interval of a perfect fifth, all carefully structured within the constraints of my Dyad System. The very end of the opera has clusters of all eight pitches of a perfect fifth in overlapping clusters that depict Archimedes tragic destiny.”

A pioneer in the field of computer music, James Dashow was one of the founders of the Centro di Sonologia Computazionale at the University of Padova, where he composed the first works of computer music in Italy; he has taught at MIT, Princeton University, the Centro para la Difusion di Musica Contemporanea in Madrid and the Musica Viva Festival in Lisbon. In 2000, he was awarded the prestigious Prix Magistere at the 30th Festival International de Musique et d’Art Sonore Electroacoustiques in Bourges. In 2011, Dashow was presented with the distinguished career award “Il CEMAT per la Musica” from the Federazione CEMAT (Roma) for his outstanding contributions to electronic music.

Dashow served as the first vice-president of the International Computer Music Association. He has written theoretical and analytical articles for Perspectives of New Music, the Computer Music Journal, La Musica, and Interface, and is the author of the MUSIC30 language for digital sound synthesis.

He makes his home in the Sabine Hills north of Rome.

James Dashow is certainly one of the most significant composers of electronic music in our time.

Bandcamp Daily  your guide to the world of Bandcamp

Sampa The Great joins the show to discuss her release, "As Above, So Below".